We are proud to recognize Chris Regnery as our December Employee of the Month!

Originally from Charleston, South Carolina, Chris attended Clemson University, where he earned his B.S. in Business and naturally became a massive supporter of the Clemson Tigers.

Chris joined Kavaliro exactly 3 years ago in December of 2019 as a Business Development Manager for our Charlotte, NC office. In those 3 years,  Chris' grind and natural salesmanship has amounted to huge amounts of success for him and the Charlotte team, year after year.

"Chris has been absolutely exceptional as we close out 2022, and the effort he has put in all year has helped drive the Charlotte branch forward. He has signed a number of accounts this year and the efforts on the contract and direct hire side have been a stand out effort. He is a key piece helping to grow and teach the recruiting team. We look forward to his continued growth and everything he will accomplish with Kavaliro", says Mark Skidmore.

His team would describe him tenacious, inventive and a hunter. Chris' excitement to form relationships and close deals have put him at the cusp of reaching Kavaliro's "Ring of Fire",  distinguishing him as one of the companies top producers. 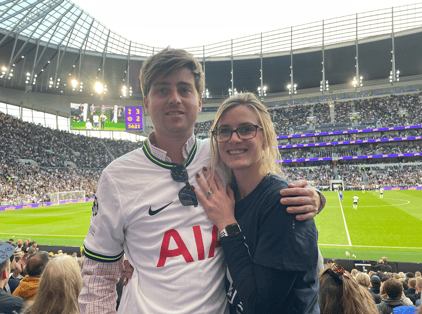 Outside of work, Chris is arguably Kavaliro's biggest sports fans. He enjoys golfing and watching football, soccer and just about any sport. He's generally the guy who takes initiative in creating some sports related competition and fun for the company. Chris is also looking forward to the married life in the upcoming year. After 3 years of dating, he proposed to his now fiancé on the Suncruiser from the James Bond film "Die Another Day" on the Thames River in London. Wedding bells ringing soon!

Chris, congrats on being our spotlight for this month!! We are blown away with the amount of success you've cultivated in these 3 years, and we are all inspired by your grind! This is just the beginning for you!