The Importance of Taking a Vacation

School is out for summer, but we're not kids any more and don't have the joyous freedom and luxury of exploring all that summer has to offer. We miss out on all the ice cream trucks (yes they still exist), sleeping in, and hot days lounging by the pool (or beach). A thought occurred to us the other day, "why do we give children the summer off but not working adults?" While the answer to that question is actually a list of answers about as thick as a George RR Martin novel, one reason stood out to us: Children need time away from the structure of school in order to both digest the information learned and form creative thought. 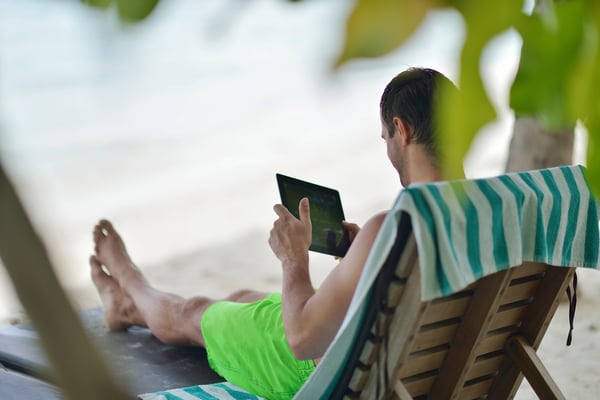 According to a 2018 study conduced by The Harris Poll, 68% of Americans surveyed said that when the returned to work after a vacation their mood was more positive, 66% said they had more energy, 57% had more motivation, while 57% felt less stressed.

Taking a vacation, as the stats above show, can reduce burn out rates and decrease stress (by 66%, sign us up!). One of the reasons we give children a break from school is because so far in their lives, they have only developed the ability to sit still and focus for so long. By giving them a break, their schooling also sees improvements. As adults, we definitely have a higher tolerance for the monotony life brings, and can handle sitting still focusing eight hours a day for five days in a row. But adults to need to remove themselves from work to see growth within our work.

Bill Gates, the chairman and principal founder of Microsoft Corporation takes a twice-yearly "Think Week" vacation to his cabin in the Pacific Northwest. He uses this time to disconnect from his current work at Microsoft, and move his mind to a more creative space. He gives himself permission to think up the craziest ideas possible. When he finishes his "Think Week" he sorts through all of his ideas and shares them with his team.

While you might not have a cabin in the Pacific Northwest where you can unplug for a week and listen to the birds chirp, there are easy ways to unplug. Remember it is not about the quantity of vacations you can take but rather the quality. Two low key days relaxing on the beach, chilling on the couch, or camping can go further towards motivating your creative thought than four jam packed days at a theme park. Take time to slow down and let your mind wander into other spaces.

Even if you don't want to take a day off because "I am too valuable at work" to miss any days, you need to remind yourself that by investing in yourself you are investing in your company. A well-rested, motivated, and mentally astute employee always outweighs an employee who is over-worked and exhausted. Don't let the guilt of not being at work be a factor in your decision to take time off.